Home » A Brief History and Overview of Microelectronics

A Brief History and Overview of Microelectronics

Microelectronics is a subfield of electronics that studies tiny complex machines or micro-chips that allow most of our devices to function, such as our cellphones. A microprocessor is a microchip. It is crucial in the field of microelectronics with billions of transistors per square centimeter, amplifying, controlling, and generating electrical signals. These transistors function as on and off switches that allow microelectronics to perform various Boolean operations by storing 1s and 0s. The Boolean operation or switching takes as little as 10 trillionths of a second. These transistors are tiny and unbelievably fast, allowing our modern devices to become smaller and faster in various applications.

Microelectronics has revolutionized the field of electronics and is rapidly transforming our lives and our world. The most fundamental building block of microelectronics, the transistor, was invented in 1947. John Bardeen Walter Brattain and William Shockley demonstrated the point-contact transistor to their co-workers at Bell Labs in New Jersey. The point-contact transistor is the first form of the transistor and was made from gold foil strips pressed into contact with a slab of Germanium on a plastic triangle. It is the size of a thumb which is much larger than the modern microscopic transistors. 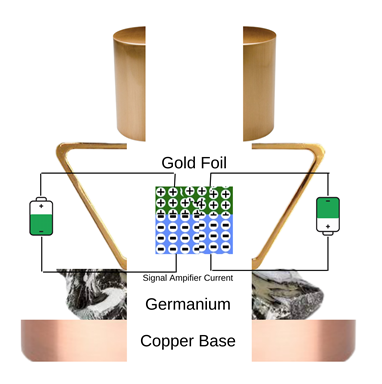 Bardeen, Brattain, and Shockley connected a microphone to one end of the unit and a loudspeaker on the other to test the amplification. The men took turns picking up the microphone and whispering, “Hello.” “HELLO!” yelled the loudspeaker on the other end of the line. This moment is significant to microelectronics because it is followed by a technological revolution throughout the world. The progress in microelectronics has been focused on shrinking the circuitry embedded onto chips.

A decade later, Jack Kilby invented the integrated circuit (IC), a small circuit containing electronic components, including transistors, resistors, capacitors, and other components. Kilby worked for Texas Instruments, a semiconductor manufacturer, as an electrical engineer. Since each component had to be wired to any other component, he was irritated by the limited technical advancements. Because of the wires, the number of components used in devices was limited and sensitive to damage. Kilby constructed a circuit entirely out of semiconductors using Texas Instrument’s knowledge of silicon transistors and semiconductors. Kilby’s final product, the integrated circuit, eliminated the need to wire each part individually. It was much smaller than any other previously devised circuit.

In 1965 Gordon Moore, one of the co-founders of Intel, published his observation regarding the future of microelectronics in the Electronics Magazine. Moore stated that the computing power of integrated circuits would increase exponentially along with the advancement of transistors over time, while the cost would decrease exponentially. The size of transistors shrank dramatically, and the number of transistors used in circuits grew rapidly. Moore’s observation drew a lot of attention and became known in the scientific world as Moore’s law. Moore’s law continues to be an accurate prediction of microelectronics’ future.

Intel developed and introduced their first microprocessor, the 4004, chip in 1971. Intel designed the 4004 microprocessors with 2,300 transistors, which resulted in as much processing power as the room-filling ENIAC. Intel continually develops microprocessors with better processing powers that power most desktop computers to this day. The advancement of technology is at its peak, from phones to drones. Microelectronics plays a prominent role in humanity’s past and continuing progress in technology. Nanotechnology is expected to be the future of microelectronics, with far smaller components processing at much faster speeds.

3. The Invention and Design of Semiconductor Components

Semiconductor memories are information-storage microelectronic circuits. There are two types of memories: read/write and read-only memories (ROMs). Silicon and Germanium are metalloids, and their crystalline structure enables them to conduct electricity while still acting as insulators, thanks to their chemical elements. In addition, silicon is the most abundant element in the Earth’s crust. These materials and other passive components such as resistors, inductors, and capacitors are used to create microelectronic devices. A silicon chip will serve as the base to activate and deactivate the components in a controlled manner to send signals for a brief period. Despite its great usefulness, however, silicon cannot satisfy all demands of microelectronics. Microelectronics manufacturers are in search of a faster and more invincible material to integrate into circuits.

Making any microelectronic system entails several measures. In this regard, integrated circuits are the most complicated. Circuit design and chip fabrication are the two parts of the process. When creating an integrated circuit, a complicated staging method is used to transmit a signal to the desired output 3. This necessitates reading a textbook, but an application on how the chip functions can be addressed.

RFID stands for Radio Frequency Identification. It is a wireless technology that uses a chip electromagnetic frequency to identify something. RFID systems are used in most passports, vehicles, contactless card payments, smartphones, key fob, and more. An RFID system consists of a transponder (tag) and a reader.

RFID readers are made up of a radio frequency module, a control unit, and an antenna that generated an electromagnetic field. On the other hand, a tag consists of a single antenna for receiving and transmitting signals and an integrated circuit (IC) that stores and processes data while controlling and decoding radio-frequency (RF) signals from the antenna.

An interaction happens between a tag and a reader when they are close enough to share an electromagnetic field. This interaction ignites voltage in the tag’s antenna to power up the tag’s microchip. The microchip receives power and data of requests from the reader and returns the requested data to the reader.

Since World War II, RFID technology has been a longstanding technology used to identify approaching friendly aircraft and enemy aircraft by the British military. The manufacturing of RFID chips has expanded in the last two decades. RFID technology has also enabled state-of-the-art techniques and advances in microelectronics health monitoring through contactless testing. Their use spread very quickly among many industries, from healthcare to ware stores.

To pursue a career as an Electronics Design Engineer, one must enroll in an ABET-accredited institution and pursue a bachelor’s degree in Electrical/Computer Engineering.  Telecommunications engineering, signal processing, instrumentation, control engineering, and microelectronics are all subfields of an Electronic Design Engineer. An aspiring engineer must hone their expertise in product analysis, testing, and design to work in various industries. Working with project managers often requires coordination and time management in presenting, budgeting, completing tasks on time, and maintaining consistency. Nowadays, there are more specialized bachelor’s programs such as Microelectronic Engineering, where students can incorporate microelectronics or nanoelectronics circuits and sensors into a variety of products with a microelectronic engineering degree.